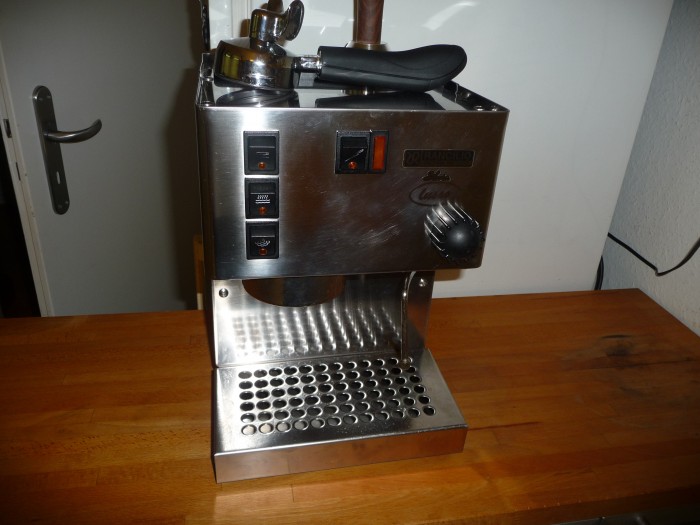 I bought an old Rancilio Silvia at ebay. This espresso machine seems to be somehow very popular – at least you can find a lot of information about it in the Internet including people upgrading it with a PID, pre-infusion, applying insulation to the heater and doing various other modifications. So it’s a good choice if you want to dismantle, repair und put it together again. Mine came in a really horrible state. The metal base was completed rusted, all plumbing was untight and if that would not have  already been enough the DHL guy smashed it to the ground so the base was bent and one of the rusted weld points was broken.

Taking it apart was not a difficult job. This coffee maker is very well engineered. You can sense that Rancilio produces professional coffee makers for gastronomy and the home style machines benefit from that. This is not only about the brass heater but the general construction like the thick metal sheet and the massive base.  All parts including the outer metal sheets are mounted to the base construction and can be easily removed after turning out the specific screws. Only the back metal case gave me some headache as the  screw was dull so I had to kill the screw head with an impact driver and a 4mm drill bit.

First I removed the the loose rust chips with a screwdriver followed by a treatment with my sanding disc which can be mounted to any impact driver. The result was not very satisfying, especially as I couldn’t reach all the corners very well. So I bought some hammerit fluid to get rid of the rust with the power of chemistry. I was probably not patient enough but  even after the 2nd treatment I still had way to much rust attached to the base. I remembered an article about rust removal with the help of electrolyse which has some big advantages over my previous attempts:

I used a cheap ikea box I had at hand filled it up with water so that it would cover the complete bottom of the Silvia’s base frame. I added two packs of baking powder to create the electrolyte.

Two thin metal sheets acted as the anode (where you connect the plus cable of your power supply). The base frame was placed in the electrolyte bath and the minus cable connected to one of the screws on the base.

I didn’t exactly knew how much power I should apply and the instructions I had were not really precise on this. I started with 24Volts which resulted in a 3 ampere current which seemed fine to me. The chemical reaction started right away visible in little bubbles that came up from where most of the rust reside.

I kept the process going for almost 48 hours and after that, all rust had gone and the metal was covered with a thin layer of black ….., which I removed with a brass brush.

Priming & Varnishing the steel base

I bought primer and black varnish aerosol cans at amazon and applied that first coat of primer right after I had removed all the coverings from the electrolyte bath to prevent it from rusting again. Since black on black isn’t a nice contrast I took a screw driver and swept through all corners with gentle pressure to find areas where the primer didn’t join with metal or old varnish but with loose leftovers from the electrolyse process. I sanded those areas again and applied another coat of primer.

Initially I wanted to fill all the areas that were treated badly by the rust but since they were all not visible after assembly and it wouldn’t give any structural improvements I decided against it. I smeared epoxy into some of the gaps that might be  reached by water during operations though. Also I epoxied the transitions between the frames where one of the weld points broke. In parallel to the work on the base frame my wife and I decalcified all water-bearing parts. Dismantling the boiler, the steam valve and pipe was quite difficult as all screws and coupling nuts didn’t want to turn at all. I applied some WD 40 which helped a lot and after a lot of carefull back and forth movements with the appropriate wrenches I could finally loosen them all. Well, the nut that connects steam pipe & valve still didn’t want to move after a 24 hour bath in WD40 so I had to use a pipe wrench. Unfortunately I left a lot of marks on the nut and the connection with the pipe was so tight that I turned a spiral into the pipe. We decalcified the boiler with citric acid and all other parts with vinegar essence

After all the descale work was done I started to mount the boiler on the base frame again. Next I wanted to mount the steam pipe but then I realised that one of the fittings broke when I initially dismantled the machine.  I spent half a day to find a replacement but could only get one for a more recent version (V1 or V2) of Miss Silvia. So I ordered the necessary equipment to solder the brass fitting. After a 3 day compulsory break I got a burner powered with camping gas, silver solder, flux and a ceramic stone. I applied some of the flux to both parts of the broken fitting, placed them on the ceramic stone and heated them up until they started to become red. Then it was just a matter of touching the crack with the silver solder and two or three centimeters melted instantly and nicely infiltrated the crack and covered the surrounding areas. Much easier than I though!

The reassembly process was as straight forward as dismantling the maschine. I applied some teflon seal tape to all the threads of the water-bearing parts because none of them seemed to be water tight when I got the machine (water arrears on all connections). I just had an issue with placing the electric connectors to the right positions on the switches. I initially had numbered them all carefully but forgot to note the free pins on the switches. Fortunately there a free circuit plans available in the internet. I did a dry run without any of the metal covering sheets mounted to see if everything would be water-tight. And it was besides the steam-valve which I will accept for now and fix with the next maintenance.

Before installing the outer case I insulated the boiler to reduce warmup-time and genreal energy consumption. There are pre-cut sets available at ebay but I decided to go for the cheap way and just ordered 1000 x 100 x 10 mm of Armaflex HT which can be easily trimmed with a utility knife.

This project was a lot of fun, especially as I learned some new techniques like hard soldering with silver solder or the  electrolyse derust method. Also, this type of espresso machines will always require some regular maintenance that goes beyond the usual decalc flushing with citric acid. Knowing the machine in detail will make such maintenance a lot easier and less expensive in the future.

So and how does the coffee taste? Well, we just had a couple of not so great espressi and still need to learn all about temperature surfing, beans, grinding and so.

This website uses cookies to improve your experience while you navigate through the website. Out of these cookies, the cookies that are categorized as necessary are stored on your browser as they are essential for the working of basic functionalities of the website. We also use third-party cookies that help us analyze and understand how you use this website. These cookies will be stored in your browser only with your consent. You also have the option to opt-out of these cookies. But opting out of some of these cookies may have an effect on your browsing experience.
Necessary Always Enabled
Necessary cookies are absolutely essential for the website to function properly. This category only includes cookies that ensures basic functionalities and security features of the website. These cookies do not store any personal information.
Non-necessary
Any cookies that may not be particularly necessary for the website to function and is used specifically to collect user personal data via analytics, ads, other embedded contents are termed as non-necessary cookies. It is mandatory to procure user consent prior to running these cookies on your website.
SAVE & ACCEPT